KOCH OUT OF LIVERPOOL GAME

Leeds United midfielder Robin Koch has been ruled out of the rescheduled Premier League game with hosts Liverpool on Wednesday night after he suffered an head injury in the last league game at home to Manchester United on Sunday. Koch was confirmed as an absentee for the Liverpool game by Leeds United manager Marcelo Bielsa during his pre-match presser on Tuesday ahead of the league clash billed to take place at Anfieldlater this week. 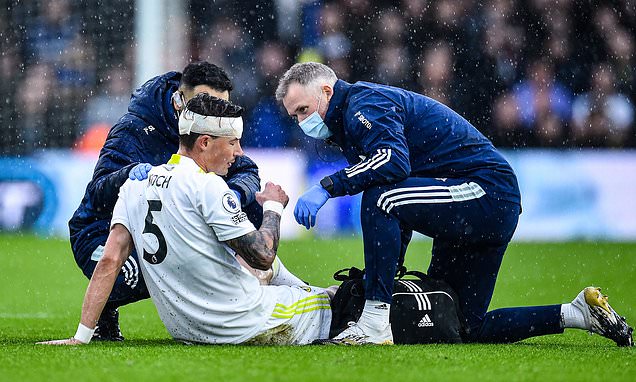 German defender Koch had to be substituted during the Manchester United game last weekend after he suffered a head injury. The utility player continued to play for some minutes before Bielsa decided to remove him when he could not carry on. The Leeds United medical staffs have been heavily criticisedfor the decision to let the player continue playing despite him suffering concussion. On the incident, Bielsa informed reporters that Koch was removed because he had a cut on his head.

Koch will miss the Liverpool game as stated earlier, but he should be back for the home game with North London team Tottenham Hotspur at the weekend.

Leeds United go into the Liverpool game with the worst defence in the division and they have conceded at least three goals in each of their last three Premier League matches. In the last three games, they have conceded ten Premier League goals. They conceded three times in the 3-3 away draw against Aston Villa three games ago before conceding another three goals in the 3-0 loss to hosts Everton two games ago. In their last game, Leeds United conceded four goals as they were beaten 4-2 at home by rivals Manchester United.